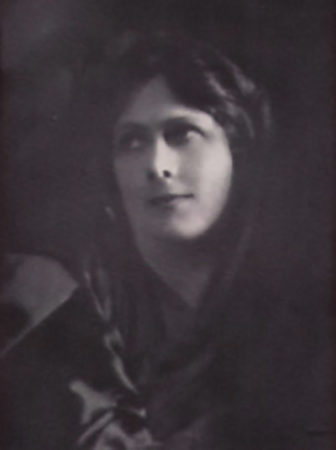 Isadora Duncan was born on May 26, 1877, to a prominent San Francisco family. In October of the same year, her father’s bank failed. Shortly afterward her parents were divorced and her father remarried. Her mother had to give piano lessons to support her four children. The two boys found odd jobs, while young Isadora and her sister Elizabeth taught dancing to neighborhood children. When not teaching, or in school, Isadora explored the beach and would later say that her earliest ideas of dance came from watching the rhythms of the waves.

She was also influenced by the ideas of Francois Delsarte (1811-1871). The French Delsarte believed that “the Natural” is the most beautiful, and that natural movement is that which is made in accord with both the structure of the body and the pull of gravity. Among his American followers were Genevieve Stebbins and Mrs. Richard Hovey who lectured, danced, or declaimed poetry with eloquent gestures, wearing Greek robes. (It was then the Greek revival period in both European and American art). Delsarte’s theories and the Greek costumes would have an effect on Isadora as her own dance evolved.

In 1890 at the age of 13, Isadora gave her first dance recital at the First Unitarian Church in Oakland. (The family had moved to Oakland after the bank’s failure.) The sisters and their brothers also taught social dancing: waltzes, polkas, and schottisches. The San Francisco area was already a center of music and theatre. Opera companies from Europe performed there, as did eminent actors Edwin Booth, Sarah Bernhardt, Henry Irving, and Ellen Terry. The young Duncans were interested in all the arts. Led by the older brother Augustin (who would become a well-known actor) they toured the California coast with their own version of plays and entertainment.

In 1895 Isadora and her mother traveled to Chicago where, after a brief dancing engagement, Isadora was hired by New York producer Augustin Daly for his touring company. From 1895 to the end of 1897 Isadora took part in Daly’s productions, sometimes as an incidental dancer, sometimes as a bit player, in New York. Isadora gave recitals at the homes of society ladies, and she and Elizabeth taught dancing to children while her mother played the piano. One day in 1899 the building in which the Duncans were teaching caught fire. They managed to rescue their pupils but all of Duncan’s belongings were destroyed. Penniless, they decided to travel to England, and with small gifts and loans from the parents whose children they saved, they booked passage on a cattle boat. 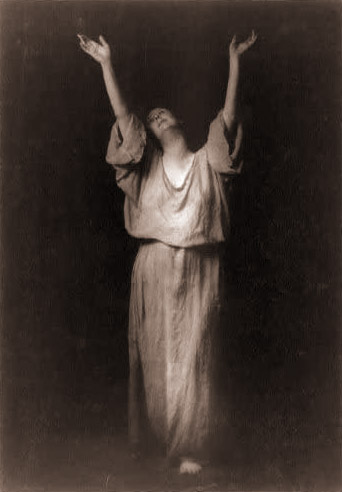 In England Isadora gave three concerts at the New Gallery, and encouraged by music critic J. Fuller Maitland, she began dancing to serious music. She also spent much time in the British Museum with her brother Raymond, studying the movements of the figures on Greek vases and the friezes from the Parthenon. She would later study figures in museums, churches, and temples in Paris, Berlin, Florence, Rome, and Athens, and what she learned from the great art of motion and expression she would incorporate in her dances.

In her speech, The Dance of the Future, made in Berlin when she was 26, she said that nature was the source of the dance. Every creature moves according to its nature – that is, according to its feelings and its physical structure. The Movements of the savage were natural and beautiful. So too were the movements of the classical Greeks wearing simple tunics and sandals. But ballet, with its artificial stops, starts, it’s holding of poses and its toe dancing is the opposite of natural motion. Its movements do not flow successively from one another. It tries to “create the delusion that gravity does not exist”. Moreover, it harms the body: “Under the tricots are dancing deformed muscles .. underneath the muscles are deformed bones” She added: “It is not a question of true art … it is a question of the development of perfect mothers and the birth of healthy and beautiful children … In (my) school I shall not teach the children to imitate my movements but to make their own … O. she is coming, the dancer of the future: … the highest intelligence in the freest body!”

With this speech, she aligned herself with the women’s movement, while at the same time advocating dance both as a necessary part of children’s education and a means of living a healthy, free life. She would found schools in Berlin, in Paris, and after the Russian Revolution, in Moscow. During the First World War children from her Berlin and Paris schools, under the tutelage of her sister Elizabeth, would come to the United States. After Isadora’s death, girls from the Moscow school would tour the United States, guided by Irma Duncan, one of Isadora’s six original pupils, until the Russian girls were recalled to the Soviet Union when they were replaced on tour by American Duncan pupils. It is through Isadora’s six original pupils: Anna, Irma, Lisa, Theresa, Margot, and Erica (nicknamed “The Isadorables”) and their European and American colleagues and descendants that her work has been transmitted.

What was Isadora’s choreography like and what effect has it had on dance? Isadora’s lyrical works were notable for their lightness, and for the long, flowing undular movement of arms and body. In her dramatic dances, she used movements that were abrupt, violent (if the motion she wished to express was violent, as in The Dance of the Amazons), and even contorted. In The Dance of the Furies from Orpheus she appeared to be lifting boulders, she beat her head against the earth, she fell to the ground. Martha Graham is sometimes spoken of as the dancer who “discovered the floor” a claim which can also be made for Mary Wigman. But the discovery goes back to Isadora, with her insistence on the force of gravity as part of the dance. Her emphasis on natural, fluid and expressive movement would have a stimulating effect on such ballet choreographers as Fokine, Tudor, and Ashton, and it would broaden the range of modern dance which was just then coming into being, with Isadora, Loie Fuller, Ruth St. Denis and Ted Shawn as its diverse pioneers.

Isadora also composed works on social and political themes, such as The Marseillaise (inspired by the First World War) and The Marche Slave (about the Russian Revolution). Later in the Soviet Union, she would make dances on the themes of labor or revolution which would influence Graham, Holm, Weidman, Humphrey, Limon, Tamiris and Sokolow in the United States and Wigman and Jooss in Germany in the ’30s and ’40s; while her stirring use of dancers who moved to the songs they are singing is eloquently demonstrated today by the Moiseyev folk ballet. Even her contemporaries, Ruth St. Denis and Ted Shawn, though very different in their approach to the dance were influenced by her use of Greek themes and symphonic music.

By her example, she made dance in many schools a normal part of the curriculum, seen not simply as exercise but as a life-enhancing experience. Her own works, which had temporarily dropped out of sight in the year following her death, are performed in the theatre again and are enthusiastically received by audiences and critics alike. Her economy of means, her lyricism, and her expressiveness have been noted and applauded. Modern Dance has absorbed her teaching, and the ballet has been permeated by her emphasis on musicality and psychological truth. Before her, in much of the world, dance was considered simply entertainment. She gave it the status of art.

By Fredrika Blair
(Author: Isadora: Portrait of the Artist as a Woman, published 1986 McGraw-Hill and William Morrow/Quill.)